BANGKOK/YANGON — Myanmar’s economy is expected to contract by 18% this year amid deepening political turmoil following the Feb. 1 military takeover and the rapid rise of a third wave of COVID-19, according to new research by the World Bank.

The estimate, contained in the bank’s Myanmar Economic Monitor report issued on Monday, is nearly double the 10% annual decline projected in March and suggests the economy could suffer further hits in coming months.

Other forecasts, including one in June by Fitch Solutions, an arm of the global credit ratings group, estimated a contraction of 20% or more in the fiscal year to Sept. 30.

Citing the “magnitude and duration'” of recent economic shocks, the World Bank acknowledged that the pandemic will have substantial additional economic impacts and an immediate threat to lives and livelihoods which could last “well into 2022.” Myanmar reported a total of nearly 260,000 cases and 6,460 deaths as of July 24 and is averaging about 6,000 new cases a day — although the figures could be significantly understated due to limited testing and information flows.

The COVID-19 outbreak is understood to have lowered the World Bank’s forecast by about five percentage points from an earlier projection of 13% contraction in Myanmar’s gross domestic product this fiscal year to Sept. 30. The report is the most comprehensive review of Myanmar economic data to be published since Feb. 1.

An 18% economic contraction would compound weak growth in 2020 due to earlier COVID-19 waves, the report noted. This would leave the country’s economy around 30% smaller than it would have been in the absence of COVID-19 and the military takeover, “with damaging implications for lives, livelihoods, poverty and future growth,” the World Bank said.

Kim Alan Edwards, the World Bank’s senior economist for Myanmar, warned of further economic contraction later in the year due to the pandemic. “While there were initial signs of stabilization in some areas in May and June, with mobility improving and logistics disruptions easing, overall economic activity remained very weak and further contraction is likely from July onward,” he said.

The poor economic outlook is being further weakened by collapsing consumer demand, which has been hit since Feb. 1 by reduced mobility, lower incomes and employment, logistics and transport constraints, and a reduction in new investment and new factory orders, the report said. “Critical health, education, and business services have been disrupted, due in part to the Civil Disobedience Movement and associated worker strikes which emerged as a protest against the coup.”

Business and the financial sector have also been hit hard by the crisis, the report noted, citing its nationwide business survey, conducted in June. Liquidity shortages and banking sector disruptions have also weighed on the economy, limiting the ability to pay employees and suppliers, while internet access was heavily restricted through the three months to April.

More than three-quarters of the 500 companies surveyed by the World Bank in June said the coup impact was worse than last year’s COVID-19 disruption, a finding in line with the results of a joint Yangon-based chambers of commerce survey in April. The survey also shows that more than half the companies polled experienced cash-flow shortages in June, forcing nearly 40% of companies to rely on loans from family and friends as a major source of financing, compared with 26% last December. 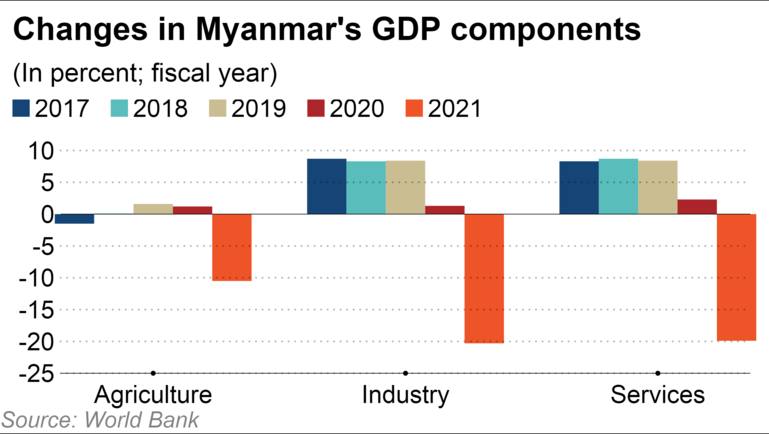 Of equal concern for Southeast Asia are the regional implications of Myanmar’s parallel economic and COVID-19 crises.

In earlier remarks, the World Bank’s Group President David Malpass and Vice President for East Asia and Pacific Victoria Kwakwa expressed “grave concern” about the potential knock-on effect of Myanmar’s problems. “You cannot assume that Myanmar is an island. It’s going to spill over to other countries,” Kwakwa told Nikkei Asia on July 15. “That’s a regional issue that needs to be looked at very carefully.”

The report said that around 1 million jobs could be lost in Myanmar, equivalent to about 4% to 5% of total employment in 2019, while “many other workers” will suffer a decline in income due to reduced hours or wages. However, that number could be far higher, according to several independent economists working inside Myanmar, who say that if workers in the informal economy and those who have been furloughed or suspended from jobs are counted, job losses could already amount to well over a quarter of the labor force, which is estimated at about 25 million to 26 million people of a total working-age population of around 38 million.

Similarly, the bank’s projected 6% inflation rate for 2021 — a slight increase from 5.8% in 2020 — is already likely to be far higher, given recent signs of accelerated printing of new banknotes, said an economist affiliated with the Independent Economists for Myanmar, whose members formerly worked with the ousted government. Several economists warned that inflation could reach “double digits” within months.

The World Bank report cited the rapidly rising price of fuel, up 50% since the end of January, the rapid weakening of the Myanmar kyat, which has depreciated by 23% against the dollar from Feb. 1 to mid-July, and growing scarcity of food supplies amid rising security concerns, particularly in conflict areas. COVID-19-related lockdowns were also cited. The report noted that weak demand due to job losses and other factors would have a “dampening effect” on inflation. Even so, it warned of the prospect of a “significant acceleration” in inflation rates in the second half of the year, driven by factors including a potentially sharp increase in food prices in “food-deficit areas” of the country. 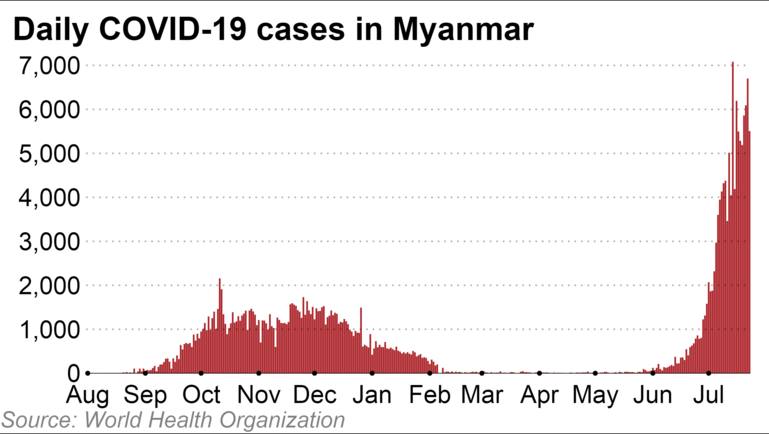 Even in October 2020, around half of all households had reported reducing food or nonfood consumption in response to COVID-19, the report noted. With savings drained even further, additional declines in household consumption are expected, with corresponding impacts on nutrition, it said.

A prolonged closure or disruption in education and training facilities could wipe out human capital gains of the last two decades, the World Bank warned. Schools were closed throughout the 2020-21 year, and closed again in July due to the resurgence of COVID-19.

Despite the reopenings of banks and repeated interventions in the currency market by the Central Bank of Myanmar, physical currency continues to be in short supply amid limited access to banking and payment services, the report said. The weakening of the Myanmar currency — standing at 1,644 to the dollar on July 26 — combined with trade disruptions has further driven up prices for fuel and other imported products.

In rural areas, farmers have been affected by lower wholesale prices for some crops, higher input prices and limited access to credit.

On the trade front, exports in the five months to June 30 were 18% lower than the equivalent period in 2020, while imports were 26% lower, according to the World Bank. However, figures from UN Comtrade suggest that both could be significantly lower than World Bank estimates — not least due to constraints on trade due to recently imposed closures of border crossings, including those with China and Thailand.

Referring to international efforts to help address Myanmar’s COVID-19 crisis, Kwakwa, hinting at negotiations with the military regime, said the World Bank was hoping that mediation and cooperation could open the way to “begin to really work around vaccines with others.”

“If channels could be open for us to work with other stakeholders, third parties, some of the private sector, we could very quickly mobilize vaccines and deployment support to address some of these issues,” she said.

“The U.N. is leading on conversations with the authorities and we’re hoping that we can get a breakthrough that allows us to go in and really help on this issue which is critical … for Myanmar, but also for countries in the region.”

Is India looking at a V or W-shaped economic recovery in FY22?