Between March 7 and 13, the annual International Yoga Festival is taking place in Rishikesh. This year, however, it will be exclusively online. It is pertinent to think about yoga tourism, particularly when it comes to Rishikesh, now.

In 2018-19, 87.5 million (12.75 %) of India’s job share was located in its travel and tourism sector. This includes direct and indirect employment. It is said that yoga’s tourism unites the world for sustainable development. This is complicated. For example, as tourism indicators rise, other dimensions fall.

At least, this is what the World Economic Forum’s 2017 Travel and Tourism Competitiveness Report explains. While it ranks India at the 40th place among 136 nations, specific categories include tourist infrastructure (110th), prioritisation of travel and tourism (104th), environmental sustainability (134th), safety and security (114th), and health and hygiene (104th).

Similar to levels from 30 years ago, the UN’s World Tourism Organisation estimates that the pandemic has reduced international tourism by 70%. In comparison, Goa’s tourism industry experienced job losses in the range of 35-58%, while according to a report published by the state’s tourism ministry, Uttarakhand has been similarly plagued. Its tourist reliant economy has been hit hard by COVID-19. Most of the 15% combined annual growth (2009-2018), which crossed the national average of 12%, has evaporated.

Between 2015-16 and 2018-19, Uttarakhand’s gross state domestic product (GSDP) was expected to annually expand at 11.55 % to reach $33.4 billion. Its pre-COVID GSDP growth rates for the past two fiscal years have been 10.34% (fiscal year 2018-19) and 11.23% (fiscal year 2017-18). This growth is partly due to Uttarakhand’s 2018 tourism policy, which provides multiple investment and subsidy opportunities, including automatic options of up to 100% subsidy for foreign direct investment (FDI) through AYUSH’s wellness streams. This includes yoga tourism.

It is clear that international tourism has much room for growth compared to domestic tourism. Though, Uttarakhand’s Vision 2022 agenda seeks to modestly increase foreign tourist arrivals to 0.5 million.

Yoga tourism in the Himalayan state of Uttarakhand and the town of Rishikesh is apparently a place where people go to stretch on the riverbank, rent motorbikes to cruise up glaciers, and stretch in the snow. It is somewhat ironic that unemployed yoga teachers have been agitating for job security in Uttarakhand since at least 2006. This is partly because of government’s failure in job creation.

The state’s ineptitude to develop human capital over the past 15 years has led to calls for unemployed yoga teachers to go on the “warpath.” This includes threats of self-immolation.

It appears that young Indian yoga teachers based in Rishikesh are predominately from ‘upper’ dvija communities. Kush, 23, has never heard of this unemployed yoga teacher’s union. He grew up in a comfortable middle class home in Rishikesh. The middle class not just consumes yoga, they also produce it. It is from a stable middle class home that Kush is able to leap into the world of yoga teaching. He is somewhat typical of the young Indian drawn to prospects of teaching yoga and maybe travelling abroad. He does sometimes stress about not finding employment, explaining, how:

“Frankly speaking, I haven’t made any money from yoga, as a profession, till now. Of course, I had chosen the yoga career only after seeing people getting good success (financially and in self-development). But, today, things have become a little challenging. Most of my college friends used to talk about going abroad for yoga teaching jobs; some of them had good connections abroad, while others used to capitalise on the dent in the local market for yoga teaching jobs. Currently, I, too, am planning to do assistant teaching work in the same school from which I took my yoga teacher training programme.”

Nalini, 24, presents a similar situation. Enticed by the idea of yoga’s global popularity and potential to engage in a fulfilling career, her experience has been less than satisfactory. As is the case in many yoga markets, exploitation of newly certified teachers is rife. Being a yoga teacher or studio owner does not appear to automatically improve one’s ethics, particularly in matters of protecting capital and preserving prosperity.

“In September 2018, I did my 200-hour teacher training programme from a yoga school in Rishikesh. I paid almost $500 for this 28-day course. The fee was less for me because I knew the school’s owner and I am Indian. After getting the yoga alliance certification I was expecting to get a job in schools here and make good money. When I started searching for a job I was shocked by the amount they were offering to new yoga teachers. The amount wasn’t enough even for my monthly expenses.”

“It was really disappointing: for the teacher training programme they are charging $500 and even more. The payout is just $100 or sometimes even less per month. I haven’t looked for any unemployed yoga teachers associations because the yoga industry is largely a private one. No one cares about your complaints. Complaints against whom? There isn’t any authority that regulates laws. One just hopes that the government will legalise private yoga schools.”

A common misconception is that the prescribed proper conduct of a yogin (practitioner of yoga) is one who is a non-violent Gandhian. It is not surprising that, globally, the average consumer of yoga knows very little about the warrior ascetics who existed at least by the 8th century. Even fewer know of the economic trade routes they controlled and how these sectarian renunciants lived in fortified encampments in between moving along the annual pilgrimage routes, often robbing as they went and operating as traders, merchants, and money lenders.

It is ironic that the preferred image of the “om santih” yogin returns to the dharmayuddha origins in the shape of the unemployed yoga teacher on the warpath. It is actually as close to the earliest attested context of the early Ṛig Vedic origin of yoga (action), which specifically relates to the martial context of preparing for war and entering battle to secure peace and preserve prosperity (yoga-kṣema), as well as rustle some cows along the way to have a feast at the end of the day. In their translation of the Ṛig Veda, Joel Brereton and Stephanie Jamison explain, that:

“The nature of a king’s rule was also affected by cycles of settlement patterns. Periods of fixed settlement (kṣéma) alternated with periods of movement (yóga, lit. “yoking up”). During the former, the clans tended their cattle and raised crops, more or less in peace, in more or less fixed habitations. During the latter, they travelled into new areas to gain new lands or to take cattle from other clans or tribes, or they confronted others moving into their territories. These two periods of settlement and movement may have been fixed according to the seasons of the year. In periods of mobilisation the clans were governed by a king who could lead them in battle.”

What does data say

According to Rishikesh-based, Drishti Yoga, Indian yoga is not about yoga teacher training courses (YTTCs). To put this into proper perspective, let us focus on Book Yoga Retreats (BYR), which has the greatest share of the online yoga/wellness holiday booking market. This argument is based on scraping data from various websites with the browser extension, Web Scraper. The data were then cleaned and compared in Excel. The intention was to look at the relative amounts of yoga retreats available on various competitor websites.

BYR’s biggest competitor is Yovada, which only has about 20% of BYR’s volume and a fraction of BYR’s 50% total internet visibility. Moz, the free domain SEO analysis tool, helps to show BYR’s dominance. Most of the desktop traffic comes from users located in the US (42,800), the UK (10,100), and France (9,300).

According to BYR’s data, Asia and Oceania dominate the global market with 49%. This is followed by Europe 31%, the US and the Caribbean 15 %, and Africa and the Middle East 5%. 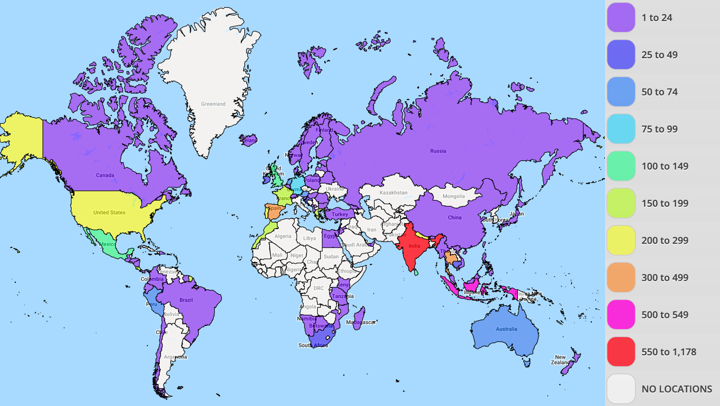 This heat map shows each of the countries mentioned on BYR’s website. It codes them according to the number of retreats offered. For more visualisations, and the raw data, please see the information at Yogascapes in Japan. The top five countries for total numbers of yoga retreats, are:

Contrary to Drishti Yoga’s assertion, the data shows that India has the largest number of retreats and YTTCs. At the regional level, India has 46% market share and 23% of the global total. Within India, more than half of the offered retreats are located in, or around, Rishikesh. Some, however, tag Rishikesh as the location but might actually be located in South India. Indonesia’s totals are 21% regional and 10% global. 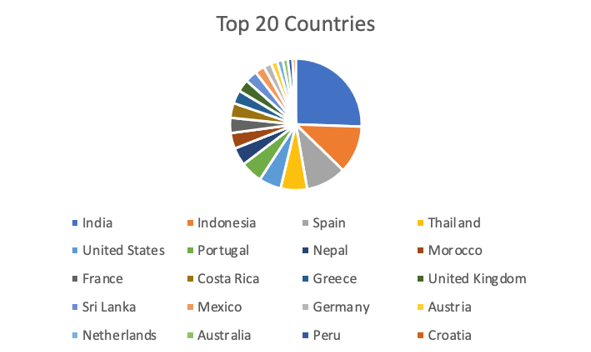 It is unclear how post-pandemic yoga tourism will bounce back and, with it, allow the underemployed yoga teachers of Rishikesh to embrace the future with confidence. Will they go on the warpath? Or will the comfort of the middle class allow them to remain in kśema, that is, yog ke binā?

While India appears to have a considerable share in the yoga tourism market, even prior to the pandemic there were signs of a slow creep away from India being the primary global destination. Not everyone interested in yoga necessarily wants to go to India. This is revealed by BYR’s 2021 top 10 yoga destination forecast, which ranks the following countries: 1) France, 2) Portugal, 3) Spain, 4) Germany, 5) Greece, 6) UK, 7) Italy, 8) US, 9) Indonesia, 10) India.

Rishikesh-based yoga teacher and writer Ashish Painuly contributed to this research. You can follow him at @ashish_painuly.

Patrick McCartney, Ph.D, is a research affiliate at the Anthropological Institute at Nanzan University, Nagoya, Japan. He is formally trained in archaeology, anthropology, sociology, classical philology, and historical linguistics. His research focuses on exploring the biographies of yoga, Sanskrit, and Buddhism through the politics of imagination and the economics of desire. His social media handles are @psdmccartney and @Yogascapesinjap. 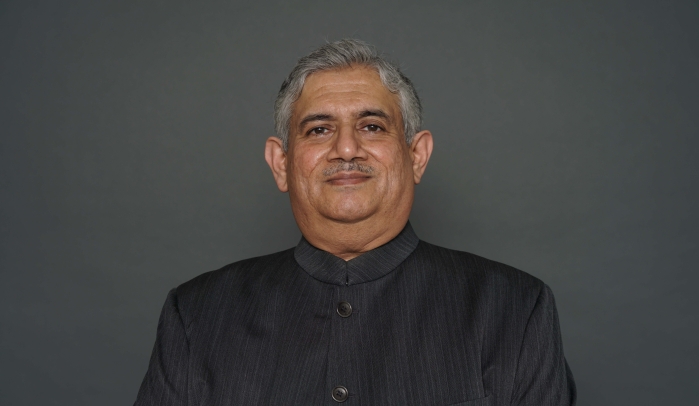