After more than 45 days of protests and eight rounds of talks with the government, India’s farmers have refused to budge.

Nothing short of a repeal of three market-friendly farm laws – designed to loosen rules around the sale, pricing and storage of farm produce – will make the farmers retreat from protest sites ringing the capital, Delhi. On Tuesday, the Supreme Court, responding to a bunch of petitions, put the laws on hold. The uncertainty lingers.

So why did Prime Minister Narendra Modi and his Bharatiya Janata Party (BJP) government fail to anticipate the blowback to the laws and misread the public mood in the affected states of Punjab and Haryana? Were they lulled into complacency because a Punjab-based ally initially supported the laws? (The Akali Dal later reversed its stand and quit the government.) Did the government believe that the laws would not lead to any significant erosion of popular support?

Mr Modi has built a reputation for tough talking and playing hardball with his critics and his party is widely believed to have its ears to the ground. Protests had been brewing in Punjab even before the laws were ratified in the parliament in the middle of the pandemic last September. Angry farmers had squatted on railway tracks in protest. In late September, the regional Akali Dal had walked out.

So why was Mr Modi caught on the wrong foot by what has now grown into arguably the world’s biggest protest?

One reason, many believe, is that Mr Modi has not faced a mass movement against his regime. A protest by the influential Patel community in Gujarat in 2015 demanding quotas in government jobs lingered on for four years before a resolution. A months-long protest led mostly by Muslim women in a Delhi neighbourhood against the controversial Citizenship Amendment Act (CAA) was cleared last March amid measures to curb the spread of coronavirus. But none were as large and intense as the ongoing protests, and did not challenge the government in the way the defiant farmers have.

“I don’t think Mr Modi misread the situation because he had no knowledge about the protests in Punjab. I think the overconfidence arose from his inexperience in dealing with mass protests,” says Prof Parminder Singh, a civil rights activist.

Second, the current protests are significantly different from similar agitations in India’s history.

In colonial India, peasant revolts against exploitative rulers often turned violent. Since Independence in 1947, farmers have staged demonstrations against falling crop prices, indebtedness and farm distress. But none have seen the staggering levels of cohesion and mobilisation – involving some 40 farmers’ unions, more than half a million protesters, and large swathes of civil society – as the ongoing agitation.

The protests have originated in Punjab, the relatively prosperous farming heartland of India. Along with its neighbour Haryana, the two states have benefited most from India’s farm policies. These farmers are now frustrated over stagnant and falling farm incomes and fear that entry of private businesses will hurt their future.

The protests have now widened to coalesce around a range of anxieties over farming in India – shrinking plots of land, diminished produce, volatility in crop prices, and centralisation of lawmaking in a country where farming matters are mainly entrusted with the states.

“The protest is more than an arena of grievances,” Pratap Bhanu Mehta, professor of political science at Ashoka University, told me. “It’s also about a lack of trust in the government and an assertive articulation of federalism.”

At the protest sites, the mood is one of unbending resistance against the government. “People here are calling it a revolution for our rights,” Surmeet Mavi, one of the editors of Trolley Times, a daily newsletter published from the protest site, told me. “It’s a feeling of fearlessly taking on the powerful government.”

For decades, the dominant stereotype of the Indian farmer has been one of a semi-literate, struggling man, who tirelessly ploughs the land. The reality is that India’s 150-odd million farmers are of different kinds – the big and small; the landed and the landless. So when it was reported that the protesters were having pizzas, there was some unkind social media chatter about whether these people really worked on the farms. It laid bare, again, how little urban Indians know about their rural brethren.

What Mr Modi’s government and many people have possibly failed to understand is that many of the protesting farmers have deep linkages with urbanity.

Many of them have children in the army and police, speak English, use social media and have both travelled and have relatives abroad. The protest sites are well organised with clinics, ambulances, kitchens, facilities, libraries, and even its own newspaper. Like most urban protests, there’s the risk of the media-fuelled spectacle overtaking the underlying complexities of the agitation. “This farmer movement speaks the language of middle-class India. They are saying they are patriotic, and fighting for the rights they hold dear,” says historian Mahesh Rangarajan.

This is also not a conventional protest against farm distress or drought, which most governments have been successful at managing. This agitation is ironically a consequence of Punjab’s success in farming – the state is the biggest beneficiary of government-guaranteed prices of wheat and rice, and elaborate state-supported marketing structures.

These have now become a millstone around Punjab’s neck – a glut of two crops has led to overflowing stocks, stagnating incomes and depleting groundwater. “The challenge is that Punjab has been unable to transition from a largely well-to-do farming society to one where there is environmentally sustainable agriculture and industrialisation,” says Prof Mehta.

More than 85% of India’s farmers are small and marginal, and they work on some 47% of the total farming land. Both the government and farmers agree that farming needs reform. But they cannot agree on specifics. “There are solutions. But the farmers don’t trust the government,” says Prof Mehta. And therein lies the real problem.

Employees who switch to remote work should make more money

Employees who switch to remote work should make more money 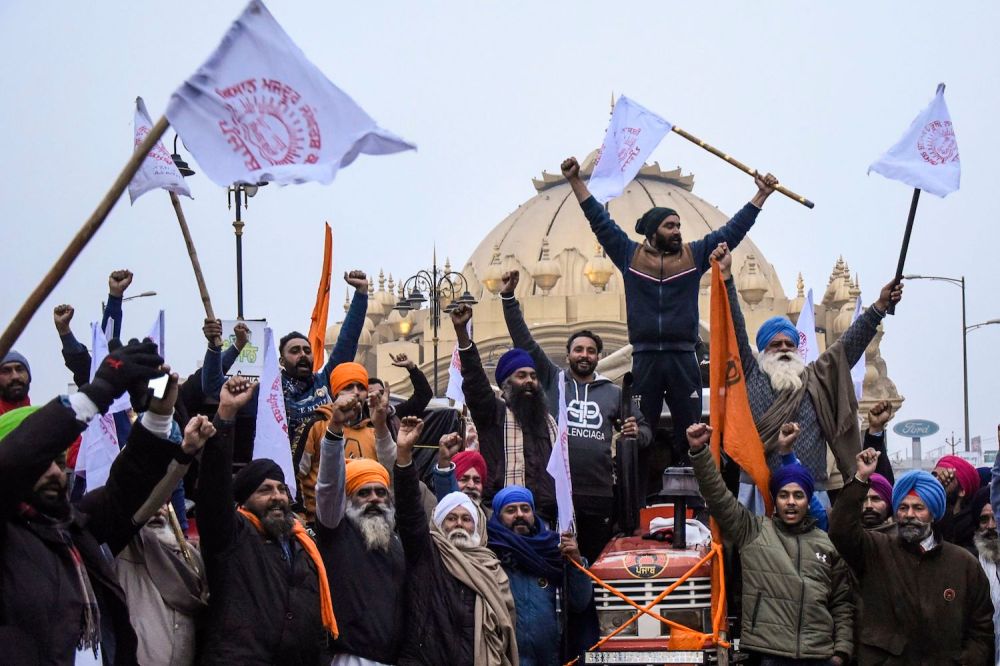