Since the signing of the Paris Climate Agreement at the end of 2015, ten Scandinavian banks have provided US$ 67.3 billion in credit, including lending and underwriting, to companies and projects in the coal, oil and gas sector. (1) In addition, as of June 30 2020, these ten banks held US$ 7.1 billion in shares in fossil fuel companies.

These figures are released in a new report, “Banking on Thin Ice: Exposing Scandinavian Bank Finance for Fossil Fuels“, published today by BankTrack, Fair Finance Guide Sweden, Fair Finance Guide Norway, Oxfam IBIS and ActionAid Denmark. The report provides a first-of-its-kind comprehensive overview of not only Scandinavian bank finance for the fossil fuel industry but also the climate policy commitments each bank has put in place.

The report puts Norway’s DNB as the top Scandinavian bank lender and underwriter to the fossil fuel industry (US$ 20 bn), followed by Sweden’s SEB (US$ 17 bn) and Finland-headquartered Nordea (US$ 15 bn).

Nordea and DNB also held the largest shareholdings in fossil fuel companies, with US$ 2.5 billion and US$ 1.3 billion respectively. Danske Bank was the third largest fossil fuel shareholder, holding US$ 1.2 billion.

The finding that the Scandinavian banking sector continues to pour billions into the very industry that is causing the climate crisis, is in stark contrast with the generally progressive reputation of the region when it comes to taking effective action on climate change.

It also raises serious questions about the sincerity of the climate commitments these banks have made when they all signed on to the Principles for Responsible Banking, which commits them to align their business activities with the goals of the Paris Agreement. (2) Meeting these goals means global CO2 emissions should decline to effectively zero by 2050. However, none of the banks have so far made a concrete commitment to achieve group-wide zero or net-zero emissions in their financing activities by 2050.

The report provides a detailed analysis of the policies that all banks currently have in place to restrict financing for the fossil fuel industry, using the methodology of the “Banking on Climate Change” report to assign a maximum of 200 points for the quality of these policies. (3) With nine of the ten banks scoring less than 25 out of 200 points there is a clear need to strengthen policy commitments on fossil fuel financing. Only SEB scores higher, with 75.5 points out of 200. (4) It is important to consider the policy scores in light of the banks’ credit exposure to the fossil fuel industry, as shown in the table below. 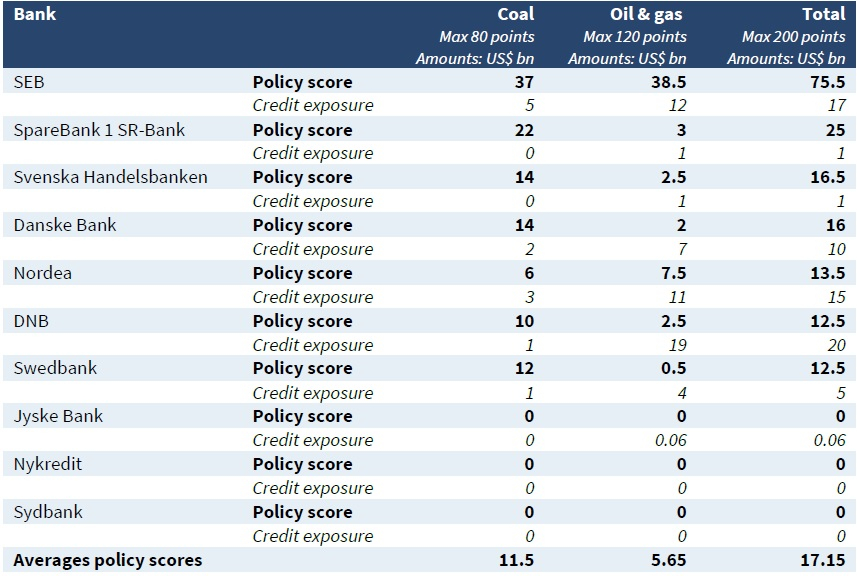 Overall, financing for coal mining and coal power is subject to more restrictions than finance for the oil & gas sector. Six of the ten banks have policies ruling out project finance for new coal power projects, while four banks rule out project finance for new coal mining projects. (5) Only SEB has a commitment in place to phase out existing financing for most coal companies, although it makes a significant exception for German companies. None of the banks explicitly restrict finance for companies expanding the coal sector, the standard set now by six European banks. (6)

All banks except Nordea and SEB score higher on coal than on oil & gas. Six of the banks have some form of restriction in place for tar sands projects and companies, while four of the ten restrict finance for fracking. Only SEB restricts some of its financing for Arctic and offshore oil & gas. Liquid Natural Gas is not covered in any of the banks’ policies. SEB is the only bank to have some phase-out commitments in place for the oil & gas sector as a whole. Its new fossil fuel policy commits the bank to phase out finance for most tar sands and fracking companies by 2030, and states that the bank will gradually phase out finance for oil and gas companies that lack a Paris-aligned transition plan.

Daisy Termorshuizen, climate campaigner at BankTrack and one of the report’s authors, said: “By continuing to support the risky fossil fuel industry that is at the core of the climate crisis, Scandinavian banks are venturing onto thin ice. To avoid being shunned as “fossil banks” by their increasingly critical customers, these banks are well advised to turn around and stop supporting the expansion of this climate wrecking industry.”

Kristian Weise, Secretary General, at Oxfam IBIS said: “While the climate emergency has casualties every day, some of the world’s richest people continue to make money on loans for and investments in fossil fuels. The massive profits of Danske Bank and Nordea are a part of an unequal reality, damaging both the climate and the livelihoods of the world’s poorest people.”

Embla Jørgensen, advisor at Fair Finance Guide Norway said: “I’m disappointed to see that DNB turned out to be the biggest creditor to the fossil fuel industry. Norwegian banks generally have a good and green reputation but this report demonstrates that they still have a long way to go on fossil financing.”

Tim Whyte, Secretary General at ActionAid Denmark said: “We think of Scandinavia as a green example for the world. This report shows there is much work to be done in our own backyard before that label is justified.”

Jakob König, advisor at Fair Finance Guide Sweden said: “The fact that SEB and Nordea have continued to support some of the worst fossil fuel companies with more than 300 billion SEK in recent years is shocking. It contradicts the banks’ promises to support the climate transition and Swedish bank clients deserve to know this.”

(2) By signing on to the Principles for Responsible Banking signatory banks commit to align their business activities with the Sustainable Development Goals and the Paris Climate Agreement.

(3) See: Banking on Climate Change 2020 and its FAQ on methodology. The next edition of this report will come out in March 2021.

(4) The assessment of SEB was based on the bank’s new “Sector Policy on Fossil Fuels” that will be published in February 2021, but which was shared in advance with BankTrack.

Maximum employment? What it means post-pandemic may have changed already

The Startup Sector Has Been Ignored Again, Says Mohandas Pai