The Indian authorities last conducted an asset-quality review in
2015/16, and the impact can still be felt to this day. The
introduction of a “bad bank” will likely include asking banks to
properly recognise their “bad loan” problems in the first place,
and authorities could potentially start a second asset-quality
review to find out the extent of the problem and clear bad loans
once and for all, especially after numerous COVID-19 policies
affecting loan classification.

Mainland Chinese authorities are enhancing oversight of online
lending platforms, which is expected to limit smaller banks’ MSME
lending ability by limiting their activities to their home region.
To maintain the positive growth and rebalancing to lend to MSMEs,
the authorities are likely to continue setting an MSME lending
growth target for larger banks in 2021. 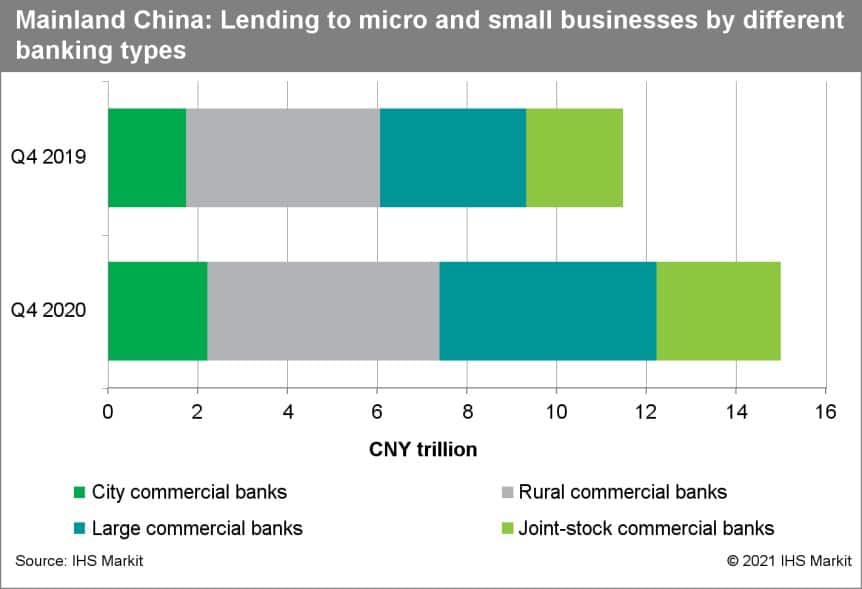 As Romania moves towards joining the eurozone, the National Bank
of Romania has sought to encourage banks to increase their
borrowing and lending denominated in euros by cutting the minimum
reserve requirement ratio on foreign currency-denominated
liabilities for credit institutions twice since February 2020.
Despite this, the sector’s foreign currency exposure has continued
to decline, with foreign currency liabilities as a proportion of
total liabilities remaining largely unchanged in the third quarter
of 2020 versus end-2019. It is likely that this exposure will
continue to fall on both sides of the balance sheet, prompting
authorities to intervene by taking additional action by, for
example, loosening reserve requirements further. 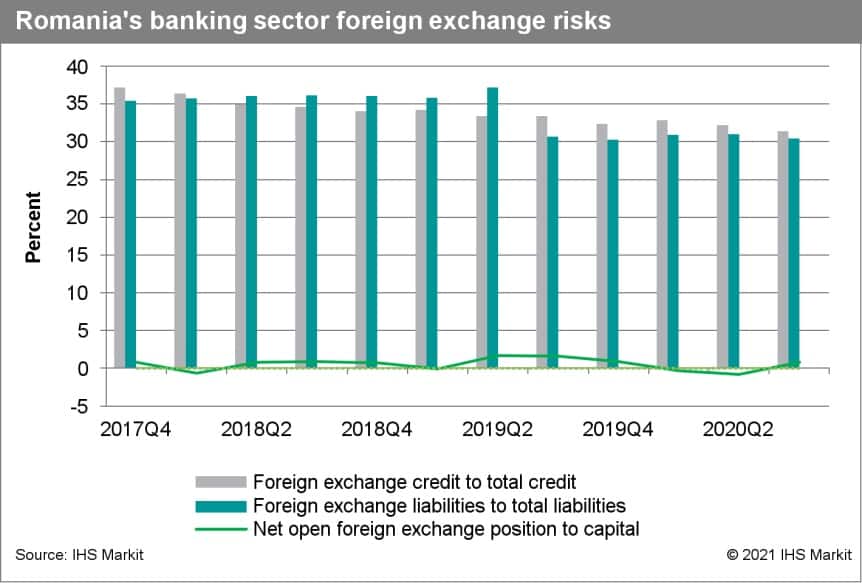 At the end of 2020, the Peruvian congress approved a law setting
interest-rate caps. However, the central government, the central
bank, and several actors of the private sector objected to the law
on the grounds that it was unconstitutional and claimed that it
would be “harmful for the stability of the financial system and the
protection of savings”. The executive did not sanction the bill and
returned it to Congress. There was a rapid review by the relevant
committee of the legislative power that dismissed the objections of
the government, reinitiating a process for the bill to be published
without the need for the executive’s approval. Given the friction
produced by this law proposal, we expect further news related to
the objections against this bill. 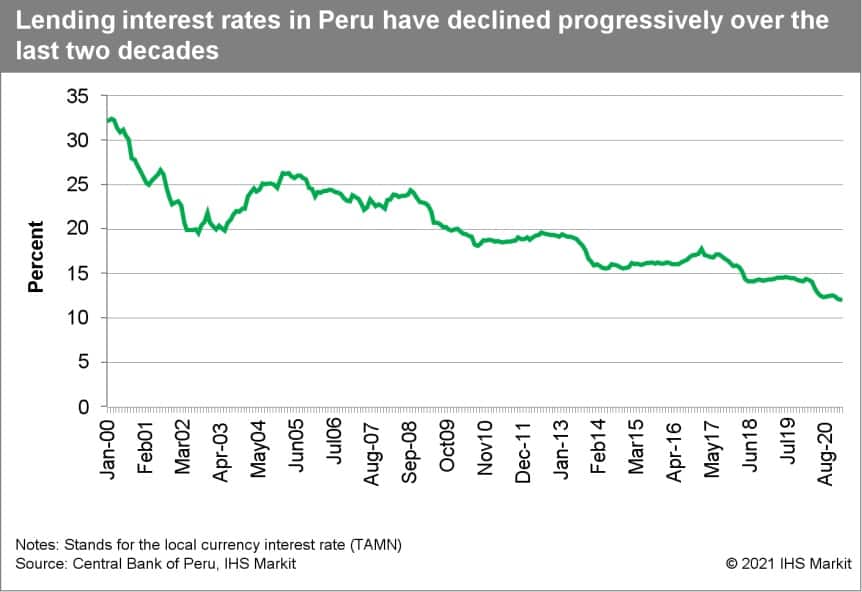 As reported previously, it is unlikely that the majority of
banks in Lebanon will be able to meet the central bank’s
end-February capital-raising deadline. However, given that the
Banque du Liban (BDL) has not announced a delay in the deadline at
this stage, IHS Markit expects it will be partially implemented.
This is likely to include the BDL providing additional time for
large banks that have taken steps to meet the deadline to raise
additional capital and the central bank takeover of smaller banks
or the formation of a “bad bank”. With assets representing 317% of
GDP in September 2020 and 47 banks offering commercial, Islamic, or
both banking services as of end-2018 (last reported), there are
many small players in operation in the banking sector, and
significant room for consolidation. 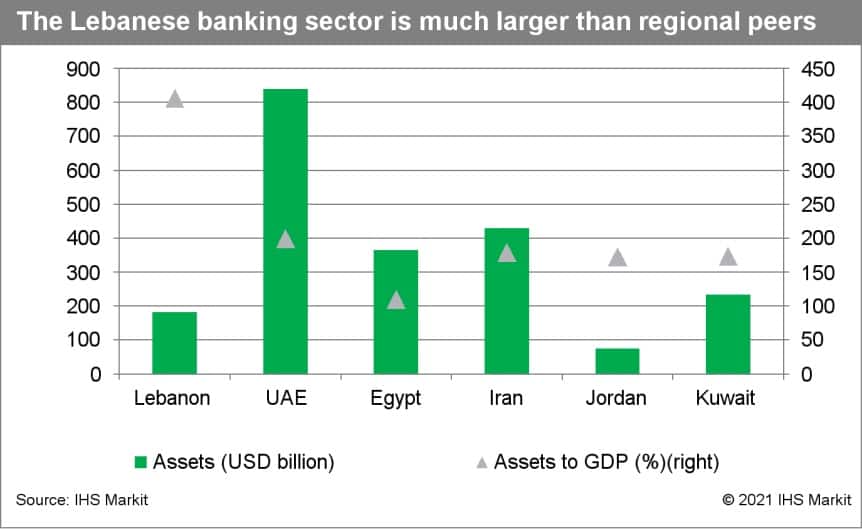 The extension of existing forbearance measures will be critical
to prevent a significant spike in NPLs given the substantial set of
measures coming to an end, particularly in economies such as Ghana,
Kenya, and Nigeria that have reported significant amounts of
restructured loans. In the case of Ghana and Kenya, NPLs were
already at elevated levels at the onset of the pandemic because of
an overhang of credit risk. Ghana’s central bank has indicated it
is in discussions to extend forbearance measures that expired in
December 2020. 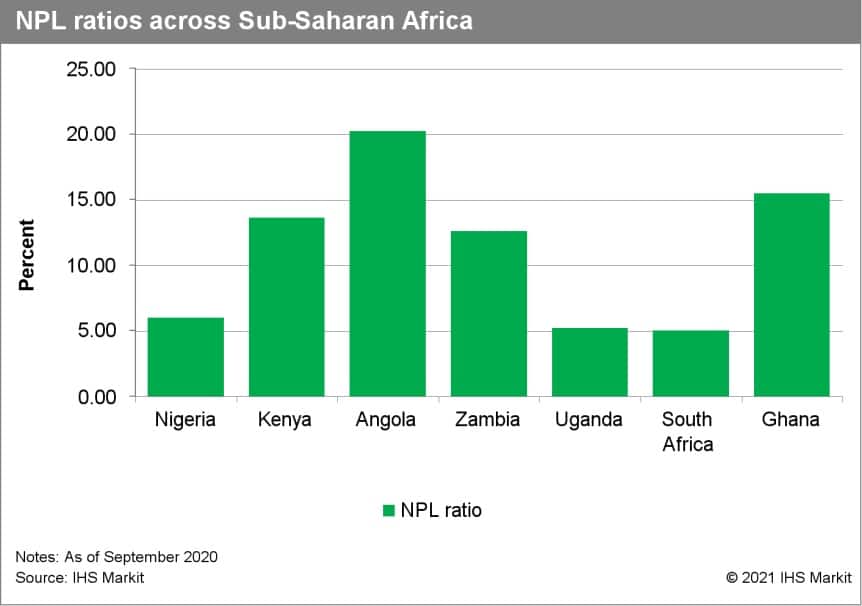 MMFs to come under shadow banking, CRD 4 reporting rules as EU rushes to tighten scrutiny on the sector